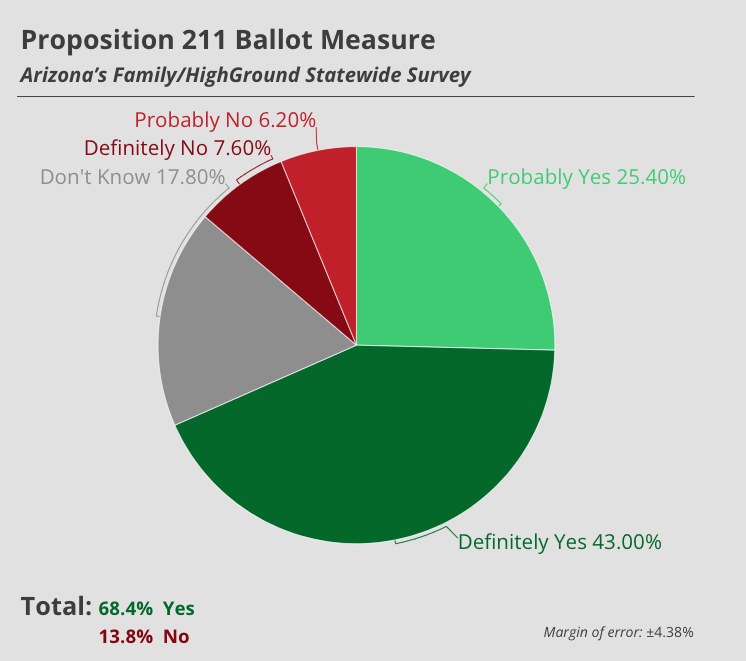 Working with Arizona’s Family, HighGround launched a statewide survey to take a closer look at the biggest races in this year’s midterm election and possible outcomes.  Earlier this week, we explored the top races facing the state including Governor, United States Senate, and down ballot races.

Today, Arizona’s Family released information regarding two important ballot issues – Proposition 211 and Proposition 310.   Prop 211 addresses the disclosure of “dark money” in our elections and Prop 310 is a temporary sales tax to help the fire districts that serve more than 1.5 million residents in Rural Arizona.  Our survey tested the descriptive title of both ballot issues as they would appear on the ballot.

Consistent with previous polling regarding dark money, voters continue to overwhelmingly want the right to know who is influencing the outcome of their elections.  As we saw with local “dark money” issues in Phoenix and Tempe, Proposition 211 has a strong likelihood of passage.  We have consistently said that if disclosure qualified for the ballot, it would win.  Congratulations to Terry Goddard and his team for withstanding a barrage of well-funded opposition to stand on the verge of victory:

One item that will be on the ballot is Proposition 211 – here is the descriptive title:

The law would require entities and persons spending over $50,000 on statewide campaigns or $25,000 on other campaigns, not including personal monies and business income, to disclose the original donor of contributions over $5,000; and create additional reporting and enforcement provisions.

“People want to know who’s spending money to influence the outcome of elections,” said Paul Bentz, HighGround Senior Vice President for Research and Strategy. He expects it to pass based on the numbers in the survey, which found that 61% of Republicans and 75.7% of Democrats would vote in favor of the proposition.

Another important issue that stands at the very end of the ballot this year is Proposition 310.  Arizona is home to 144 fire districts that serve 1.5 million residents.  Not only do they provide emergency and fire services to their local residents, but they also serve many of the most dangerous stretches of highways throughout the state.

If you face an emergency traveling to Flagstaff, Los Angeles, San Diego, the white mountains or elsewhere, the chances are the first responders who arrive on the scene would be from a local fire district.  Unlike Prop 211, the fate of Prop 310 is less certain.  While there is not significant opposition to the issue, it suffers from low information where more than a quarter of the electorate did not know enough about it to make a decision.  With its position at the end of the ballot and language focused mainly on the taxation, it may face a significant drop off in voter participation.  Here is the ballot language:

Another item that will be on the ballot is Proposition 310 – here is the descriptive title:

The law would establish a fire district safety fund to be funded via an increase of one-tenth of one percent to the state’s transaction privilege (sales) and use tax from January 1, 2023 through December 31, 2042.

“It’s not that it has some solidified anti-group against it, it’s just still suffering from an information gap here and folks aren’t able to really wrap their head around it,” Bentz says.

There are ten statewide issues on the ballot this year – many of which directly impact the future of our right to initiative and the future of our democracy.  If you would like to learn more about the issues and the arguments both for and against, you can find all of the information at the Secretary of State’s website.