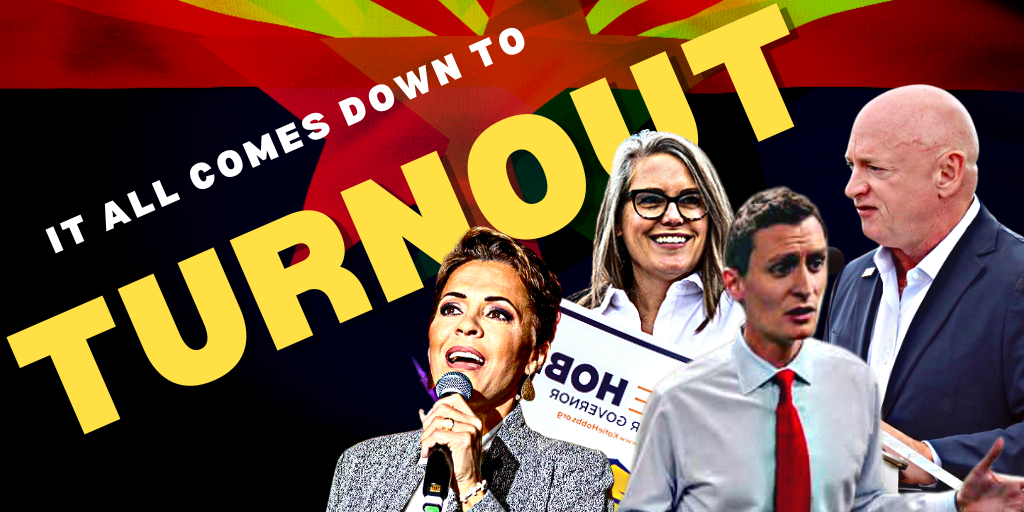 Senate and Governor’s contests in Arizona are down to one-point margins.

PHOENIX (November 3, 2022) – With Election Day less than a week away and over a million ballots already cast, Democratic Senator Mark Kelly holds a narrow 1.4-point lead over Republican Blake Masters. Kelly is earning 46.4% of the vote compared to 45% for Masters. In the same survey, the race for Arizona Governor is also now a one-point affair, but with the 1.4-point lead going to Republican nominee Kari Lake (46.6% Lake/45.2% Hobbs). The difference reveals the power of the independent and unaffiliated voter who will decide both races.

In the race for United States Senate, Mark Kelly’s lead over Blake Masters has narrowed in recent weeks. Mark Kelly’s advantage has been cut in half from three weeks ago, when HighGround’s statewide survey (October 12-13) demonstrated 42.4% for Kelly and 39.6% for Masters. Libertarian candidate Marc Victor has since withdrawn from the race and thrown his support behind Masters, but his name will remain on the ballot. More than 6% of voters remain undecided.

“Midterms traditionally favor Republicans in the State of Arizona. However, the GOP candidates at the top of the ticket are seeing more than 10% of their own party voting for their Democratic opponents,” said Paul Bentz, Senior Vice President – Research and Strategy at HighGround Inc., “That’s why the races are within the margin. The slight softness among Republicans narrows their traditional advantage and makes unaffiliated voters that much more important.”

In the race for the Governor of Arizona, Kari Lake has gained a narrow lead over Katie Hobbs with 46.6% to 45.2% respectively. This is a lead change from from HighGround’s survey three weeks ago which showed Lake slightly trailing with 44.8% and Hobbs at 45.8%. In both cases, the race is within the margin of error and is considered a statistical dead heat. Similar to the Senate race, 6.4% of voters remain undecided.

The real difference between the Governor’s race and the United States Senate is among the independent voters. Lake slightly outperforms Masters earning support from 40.8% of independent/unaffiliated voters, while Hobbs is winning 41.6% of this audience which is a slight underperformance compared to Kelly.

“This demonstrates the continuing trend that Republicans are either struggling or disinterested in earning the support of independent voters – topping out their support at 40% or less among independent and unaffiliated voters.” said Chuck Coughlin, President & CEO of HighGround Inc., “It all comes down to turnout. If independent and unaffiliated voters stay home, Republicans will edge out these races. If they show up and vote, their participation will likely benefit the Democratic nominees.”

Coughlin concluded, “I said two years ago that if Kelly won, Republicans would get another opportunity in 2022 to see if they can learn from their past mistakes. It appears that they have stuck with the same strategy of playing to their base and not expanding their narrative to attract unaffiliated voters. Republicans are counting on unaffiliated voters staying home and not participating in a low turnout cycle. As we have often said, the only poll that counts is the one on election day, and our data indicates the truth of that statement.”

The N=500 survey was conducted among likely voters 11/1 through 11/2. The poll surveyed likely Arizona 2022 General Election voters who have a history of electoral participation and was balanced to model the likely turnout of voters across party, age, region, and gender. No weighting has been applied. The sample was provided from the internal voter database maintained by HighGround.

The question quoted in the release is listed verbatim. The survey questions not released are not reasonably expected to influence the response to the question included in this release. Voters without a valid home phone or cell phone were not contacted.

The partisan advantage was set at +8% GOP based on previous midterm election trends, including the uptick in Democratic participation in past two election cycles combined with expected increase in enthusiasm among Republicans in the Gubernatorial Election. The margin of error is ±4.38%. For more information regarding the study, contact Paul Bentz at 602-528-3684.

The HighGround team has built a reputation of reliable and accurate polling over the past ten years – our research has been featured on Nate Silver’s 538, Real Clear Politics, Huffington Post, and many other publications. Paul Bentz is a three-time winner of “Best Pollster” by the Arizona Capitol Times.