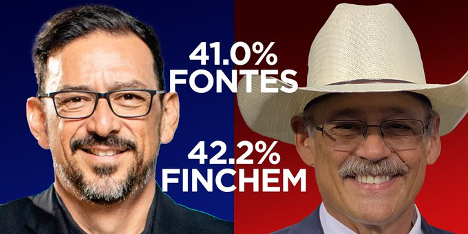 HighGround has teamed up with Arizona’s Family to take a closer look at the biggest races in this year’s midterm election and possible outcomes by polling voters.  Yesterday, we released the statewide results for both the United States Senate Race with a narrow lead for Kelly and the Arizona Governor’s race in a dead heat.

In the down-ballot races for Secretary of State, Attorney General, and Superintendent of Public Instruction, the 500-person statewide survey reveals that the Republicans have narrow leads in all three races with two out of the three within the margin of error.  Paul Bentz joined Good Morning Arizona again this morning to discuss all three races.

Republicans maintain a sizable advantage in midterm elections in Arizona with an estimated eight-point participation lead.  While all of the Republican candidates currently have earned support from about a third of the independent and unaffiliated audience, the GOP advantage combined with a solid showing in the 65 and older category have put them in a lead in this early stage of voting.

In the Secretary of State race, despite overwhelming voter opposition to banning early voting and giving the legislature the power to overturn the elections, the race remains in a dead heat.

“…it speaks to the fact that quite frankly neither party is very good at talking to Independents until right before voting starts,” Bentz said. “The less solidified those Independent folks are because they just don’t know these candidates; there’s a significant information gap.”

In the Attorney General’s race, we see the Republican preference for law and order combined with a significant number of undecided voters putting Hamadeh currently in the lead over Mayes.  His support is squarely in the middle of the 40 to 45% range of support that the Republican candidates are achieving while his opponent is two points lower than the next Democratic statewide candidate.

“Democrats need these unaffiliated voters to break for them and in pretty sizable ways in order to win, and Mayes is just not seeing it,” explained Paul Bentz, HighGround Senior Vice President for Research and Strategy. “She does have the slight female advantage at 45 to 35 (percent), but she’s not getting that 15 to 20 point advantage that we do see the other Democrats getting in this race.”

“I don’t see a lot of movement in Republicans among the Independents,” he said. “They’re not trying to build their base. What they’re really trying to do, as far as I can tell, is to try to strengthen that 65 and older category.”

Stay tuned for additional survey results throughout the week.