You can’t win turnout if you’re losing on message 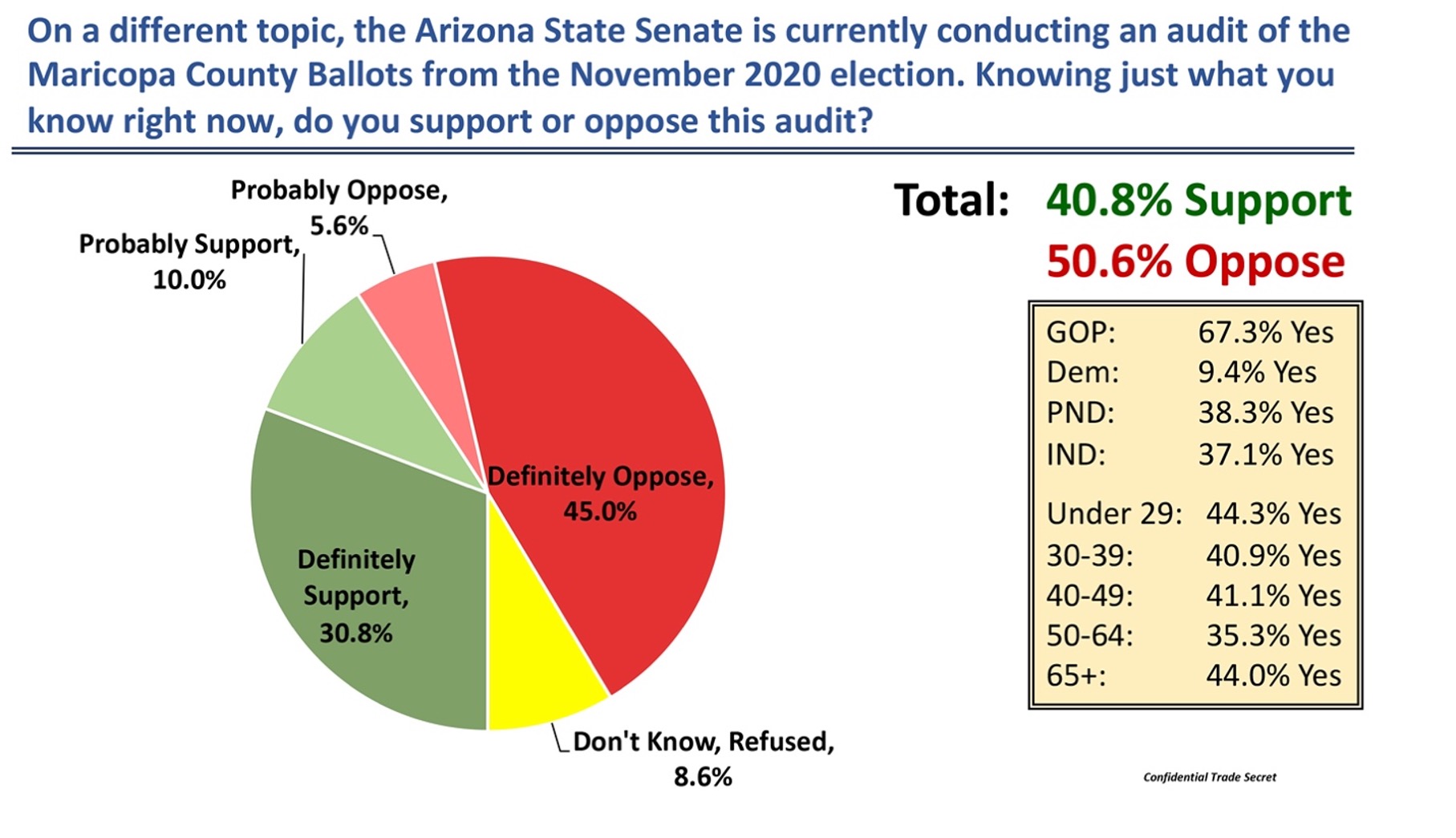 Only 40% of Maricopa County Voters Support the Audit

Back in May, HighGround conducted a statewide poll that demonstrated 40.8% of statewide likely 2022 voters supported the Arizona State Senate’s audit of Maricopa County Ballots from the November 2022 Election.  Earlier this month, we went back into the field on a separate survey in Maricopa County only and found that number amount of support remains relatively unchanged.

Maricopa County is still the key to winning statewide office in Arizona.  So, the popular narrative remains that if Republicans cannot figure out how to end this audit, it will be an electoral anvil around the neck of any member of the GOP running on the Arizona Statewide ballot in 2022 – United States Senate, Governor, Secretary of State, Attorney General, etc.  As we said in our previous post, “Continued focus on this audit or the fraud narrative will only serve to undermine their electoral success in 2022.”

Given all the legitimate criticism the audit has received, it would seem certain that the next time the Senate goes to the floor – in either special or regular session – a majority of state senators would likely stop the audit and close the circus down, unless President Fann does so before that.

However, by next year, the audit could be old news.  Or maybe it will still be a hot topic.  Only time will tell, but in the meantime, we should be considering two important questions:

The Democrats had a circus tent of candidates that bridged the ideological spectrum from Bernie to Joe and the heavy, heavy odds were Trump was a lock for re-election.

Enter the pandemic which, in normal times, would have rallied the country around their “leader.”  The pandemic revealed all of Trump’s worst character flaws:  empathy (No), compassion (No), humility (No), kindness (No), self-control (no), gentleness (no).  I could go on, but the point here is that President Trump turned into the greatest voter turnout machine in the history of American politics.

Things can (and will) change.

At this moment, in Arizona, it is immigration for Republicans and education for Democrats. The Maricopa County poll mentioned earlier showed that it’s also election integrity for Republicans and water for Democrats. Concerns about the state’s ability to keep up with growth is on the rise and issues over the next year will continue to shape voter perceptions.  At this juncture, we do not know what will be motivating voters in the early and late fall of 2022. But we should be asking, “Where does the audit fit in that matrix?”

Does the United States Congress act on DACA or some other immigration priority by then? Do Democrats succeed in referring the Arizona tax cut package on the ballot in 2022?  Will those efforts help our hurt their chances in next year?

One thing we all should be looking at, though, is how unaffiliated react to and participate in the 2022 cycle.  With both parties in seemingly mortal combat, it is these voters who will likely dictate the outcome of statewide elections.  What they believe, how they turn out, and who they support will be something we will be looking at closely as the cycle matures.

As my colleague Glen Bolger from Public Opinion Strategies famously pointed out – You can’t win turnout if you are losing on message.

In 2020, Trump and McSally performed poorly with unaffiliated voters.  Many of the down ballot Republican offices did not suffer as bad of a margin among these key swing audiences.  However, if Republicans continue to follow Trump’s lead on issues, the trend will likely worsen, and they will be looking for something other than bamboo to blame.

Perhaps smart campaigns, both Democratic and Republican candidates, should consider how to persuade this key swing portion of the electorate.

If they do, they will likely win.