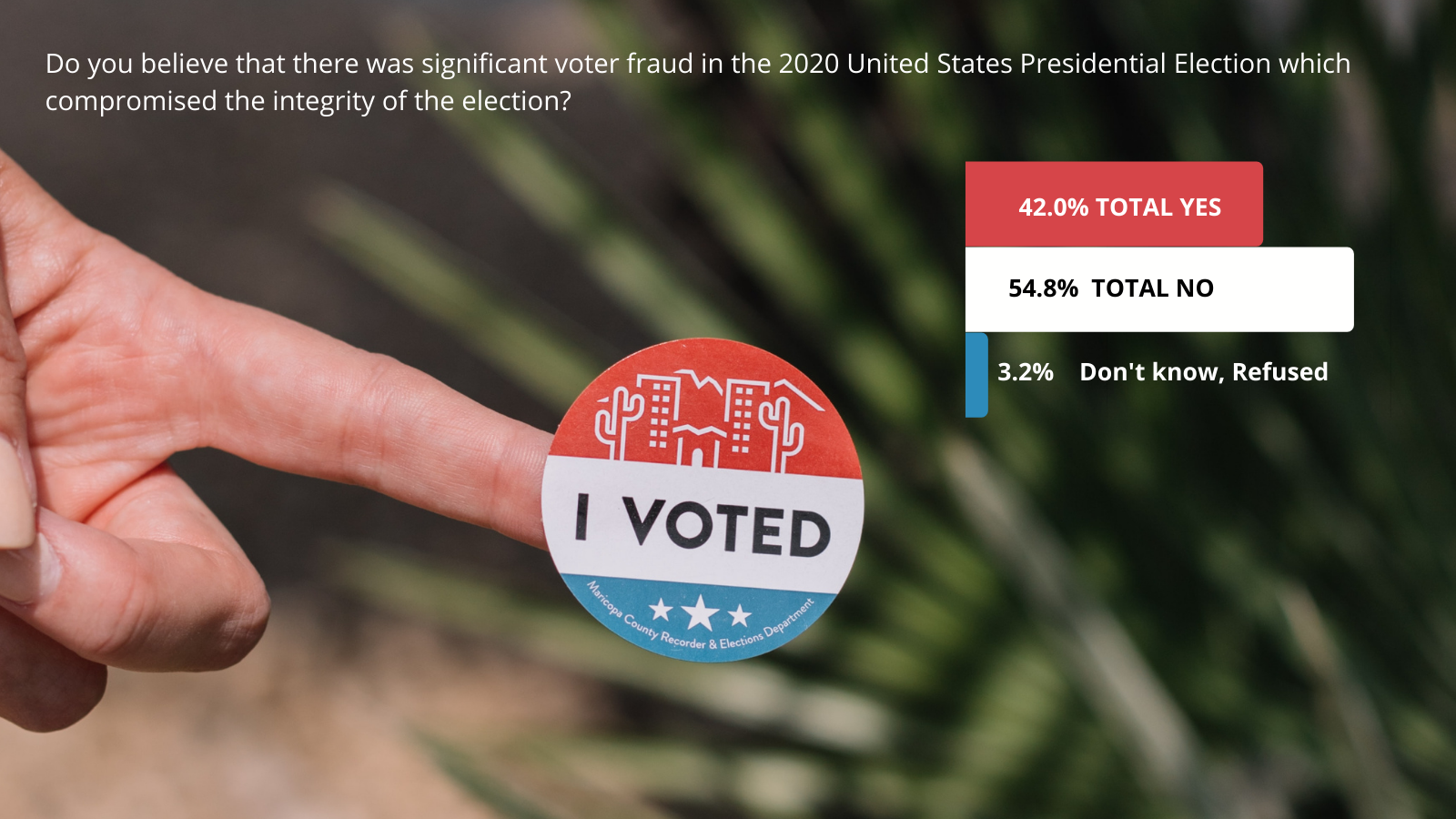 I have been asked countless times, “What’s up with that State Senate audit going on down at the Madhouse on McDowell? That seems crazy, right?”  I have responded countless times that no, it is not crazy if you understand the rabbit hole of American and Arizona politics.

So, let me attempt to explain.

HighGround, with the help of some very civic minded folks who are interested in election reform and perhaps finding a way out of this ever-deepening rabbit hole, conducted a survey of 500 Arizona voters at the end of March. The sample was balanced for what we anticipate will be the 2022 General Election cycle (42.4% Republican, 33.8% Democrat and 23.8% Other) or commonly understood as an 8.6% midterm Republican turnout advantage.  The survey asked a lot of questions, but no question elicited a more passionate time-consuming response than the following:

The intensity of the ‘No’ response should be sobering to anyone who wants to make the concept of “fraud” a significant part of a General Election campaign platform in 2022.  As it has been said in our business, converting a ‘Definitely No’ to a ‘Definitely Yes’ is about as likely as anyone recovering the internet’s Nigerian prince’s fortune.

But underneath these numbers, when you look at the partisan breakdown of responses, you see an overwhelming difference and a clear understanding of why U.S. Rep. Liz Cheney is about to get thrown out of her leadership position and why Arizona Senate President Karen Fann is advocating for the sixteen members of her caucus.

Despite only 42% of Arizonans believing there was significant fraud, 78.3% of Republicans agreed with the question. YES, you read that correctly, 81.6% of Republican women and 75.2% of Republican men believe there was fraud.  The “truth” is, watch your curated media platforms and they will tell you – conservative or progressive – what to think.

So, you must view this audit fervor through that lens:  President Fann has sixteen Republicans who constitute a one seat majority in the State Senate.  When legislative districts were last drawn in 2010, those sixteen districts currently occupied by GOP members had Republican registration advantages of 5% or more.  Arguably these Republican Senators are representing their “safe” districts and are doing the bidding of the 78.3% of Republican voters who believe there was fraud.

So, move along, no crazy here… Republican electeds doing what their voter base want them to do – investigate fraud.  Case closed, right?

Ah, but how things have changed over the past decade.  In 2020, one of those sixteen districts was won by Biden and another was won by Trump with less than 400 votes.  You must also consider that the majority, 54.8% of Arizona voters, DO NOT BELIEVE there was fraud.

As we say at HighGround, “never run the last election, run the election you are in now.”

Republicans bent on claiming fraud and making that an integral part of their statewide election campaign should understand the electoral cul-de-sac they are living in. Only 42% of voters believe there was fraud; that is clearly not a majority.  That is a losing proposition on the General Election ballot in 2022.

To sum up, a majority of Republicans believe there was fraud, a majority of the remainder of the electorate clearly do not.  In fact, a whopping 94.7% of Democrats, 65.8% of PNDs, and 67.5% of Independent and others do not.

Despite a robust economy, Republicans are running on an issue which a majority of the electorate disagrees with them on. So, if the Republicans lose the next election, will they once again have to claim fraud?

The surest way to lose the next election is to ignore the reasons why you lost the last election.

If you are wondering why Republicans lost, look in the mirror.  If you see a guy with orange hair ranting about fraud and tweeting (sorry, he was banned) about reactions to progressive identity politics, you will find your answer. The greatest Democratic turnout machine in the history of American politics is Donald J. Trump.

If you want to win the next election, do not run the last one. It is not about a person – it is about ideas.  Do not be hostage to a narrative.  Do not dig the rabbit hole even deeper.  Use the best parts of that narrative and create new holes to live in – perhaps, that will improve the housing crisis as well.