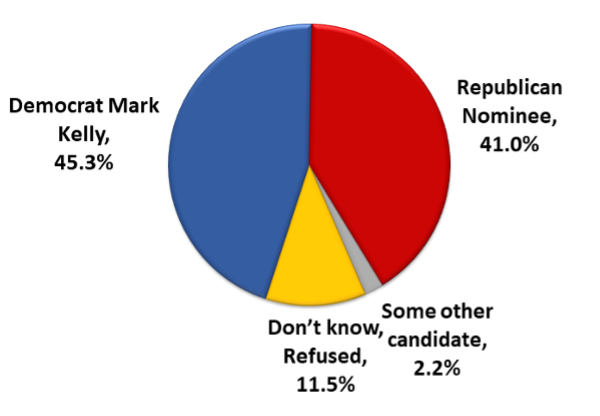 PHOENIX (April 6, 2022) – The filing window has closed in the State of Arizona and Senator Mark Kelly will be unopposed in the Democratic Primary for United States Senate. On the other side of the aisle, five Republicans have qualified for the ballot and will face off to see who will face Kelly in the November General Election. In the latest statewide survey conducted by HighGround Public Affairs, Senator Mark Kelly maintains a nearly four-point advantage (45.1% Kelly vs 41.0% Republican) with fewer than 12% of the electorate undecided.

Q. If the General Election for United States Senate were held today, would you vote for [Rotate] the Republican nominee or Democrat Mark Kelly?

Midterms traditionally favor Republicans in the State of Arizona.  Turnout from previous midterm elections have had a Republican participation advantage as high as fourteen points.  The statewide survey conducted by HighGround is set with a Republican advantage of eight-points which reflects more recent shift in Demographics and efforts by Democrats to narrow the gap during the 2018 “blue wave” midterm.

“This cycle is not going to be easy for Senator Kelly, but he is starting in a good position despite the Republican advantage,” said Paul Bentz, Senior Vice President of Research and Strategy at HighGround Public Affairs who funded the poll. “While his opponents will battle it out to appeal to narrow portions of their primary electorate, Senator Kelly can use his sizable war chest to appeal to those critical independent and unaffiliated voters needed for victory.”

“Polling is a snapshot in time.  However, throughout the 2020 cycle, Kelly was able to maintain an advantage and McSally was never able to close the gap.  The same can be said so far in 2022,” concluded Bentz. “However, issues like the lifting of Title 42 and the ongoing challenges with inflation could play a major role in this election moving forward.  Republicans are going to do everything in their power to tie Kelly to unpopular Biden Administration policies in this cycle.  Kelly will need to stick to the 2018 and 2020 playbook that has brought Senator Sinema and him success in the past.  Any deviation from that playbook will make this current four-point advantage evaporate rather quickly.”

The N=400 survey was conducted among likely voters 3/26 through 3/27. The poll surveyed likely Arizona 2022 General Election voters who have a history of electoral participation and was balanced to

model the likely turnout of voters across party, age, region, and gender.  No weighting has been applied.  The sample was provided from the internal voter database maintained by HighGround.

The questions quoted in the release is listed verbatim.  The survey questions not released are not reasonably expected to influence the response to the question included in this release.  Voters without a valid home phone or cellphone were not contacted.