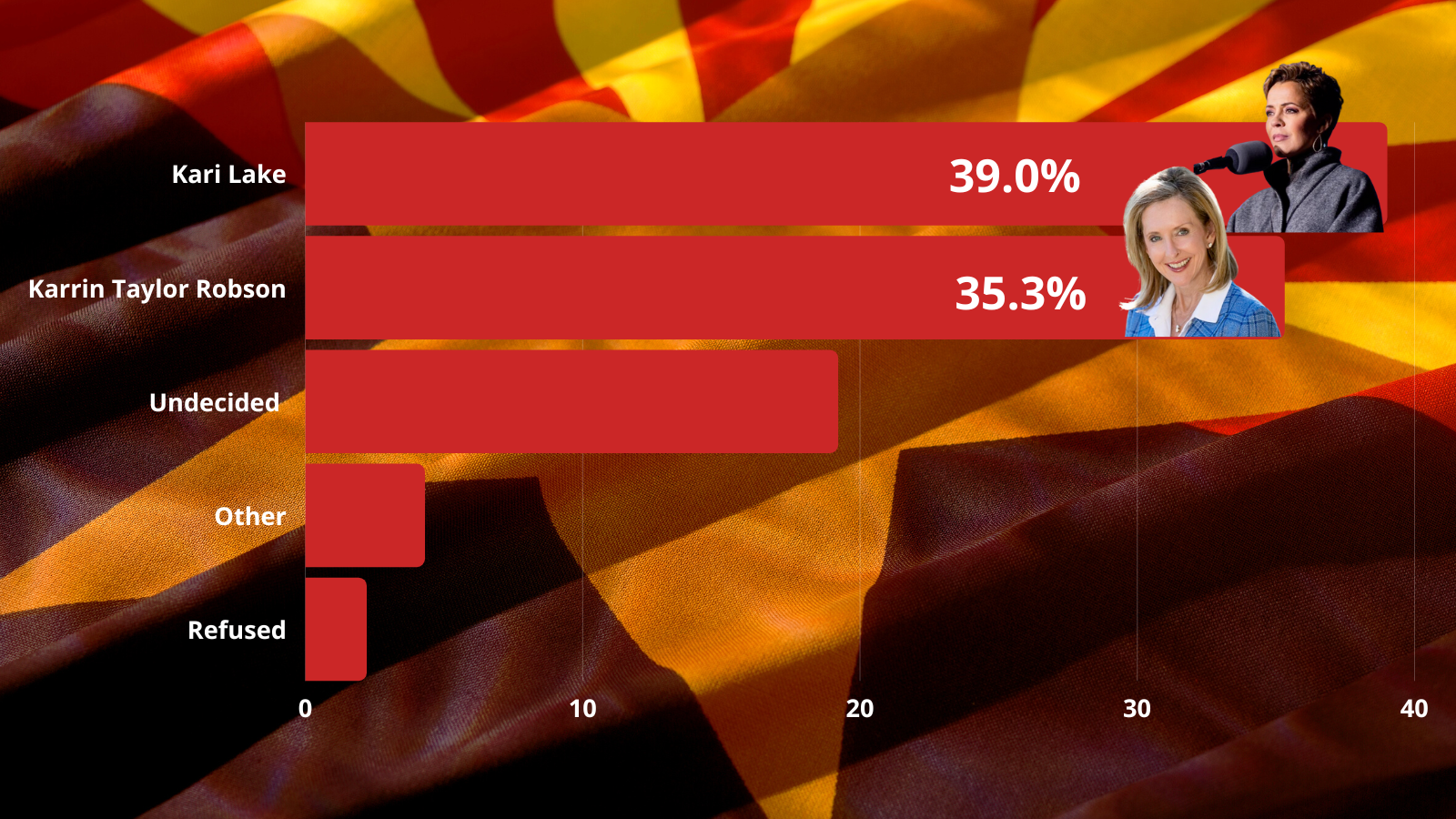 PHOENIX (July 11, 2022) – The latest statewide survey of Likely Republican Primary voters from HighGround Public Affairs reveals that Karrin Taylor Robson has narrowed the gap on front-runner Kari Lake as early voting begins in Arizona.  Robson, who started the race nearly unknown, has surged from single digit support in April to within the margin of error as the field recently narrowed down to a head-to-head between the two candidates.

In April, HighGround had the race at 30.3% for former newscaster Kari Lake and 9.5% for Karrin Taylor Robson.  In the latest survey, the race now sits at 39.0% for Lake and 35.3% for Robson.  In recent weeks, former challenger Matt Salmon bowed out of the race endorsing Robson and Governor Ducey has thrown in his support as well.  Nearly 20% of likely Republican voters remain undecided.

“Momentum appears to be building for Karrin Taylor Robson as early ballots drop,” said Chuck Coughlin, President and CEO of HighGround who funded the survey, “Lake has held a fairly steady number for months buoyed by loyal Trump supporters, but she does not appear to be growing her base.  She has stayed true to the narrow constituency that made her a front-runner in the first place.  Robson, on the other hand, appears to be picking up the bulk of the Salmon supporters, undecided, and unaffiliated voters are trending her way.  There’s a path to victory here, but it’s likely to be close.”

The N=400 survey was conducted among likely voters 7/2 through 7/7.  It was a statewide live caller survey calling both landlines and cell phones.  The margin of error is ±4.9%. The audience is set at 87.5% Republican and 12.5% independent and unaffiliated (PND/IND) to reflect ballot requests and likely participation.

Lake and Robson are splitting Republican males fairly evenly at 42.3% and 38.1% respectively.  However, Lake holds a larger margin among GOP females at 42.9% compared to 33.0% for Robson.  Independent and unaffiliated voters who have chosen to participate in the Republican primary are breaking more than 2 to 1 for Robson.  Nearly 50% of unaffiliated voters remain undecided.

“Independent and unaffiliated voters may end up deciding this Republican Primary,” explained Coughlin, “While they under participate in these elections, their influence is incredibly important.  Clearly, as we saw in 2020, Trump struggled with this audience and Lake appears to be doing the same.  They will be essential in the General Election for either party to win statewide office.  Primary candidates would be wise to turn their attention to this audience now – not only to win the Primary, but to set themselves up for the General.”

Former President Donald Trump is expected to visit Arizona later this week to give his support to Lake and the rest of his hand-picked candidates.  His early support for Lake helped boost her to the leader of the pack in the race for Governor, and many of his loyal supporters have followed suit and endorsed Lake in recent months.

Alternatively, Karrin Taylor Robson has been gathering up other national conservative endorsements including Newt Gingrich and the Club for Growth.  This latest round of endorsements culminated with Governor Ducey announcing that he was endorsing Robson last week.  The impact of his support is not reflected in this recent data as it happened as the survey was reaching completion.  Ducey remains fairly popular with a 59.2% approval rating among Republican Primary Voters.

“With a race that is already within the margin of error, Ducey’s endorsement should be a net positive for Robson,” concluded Paul Bentz, Sr. Vice President, Research and Strategy, “It would be an oversimplification to boil this race down to Trump vs. Ducey, because each candidate has their own strengths and weaknesses.  What it does show is that Robson has more places to go and more issues she can talk about compared to Lake who seems to be set on doubling and tripling down on Trump’s support.”

The N=400 survey was conducted among likely voters 7/2 through 7/7. The poll surveyed likely Arizona 2022 GOP Primary Election voters who have a history of electoral participation and was balanced to model the likely turnout of voters across party, age, region, and gender.  No weighting has been applied.  The sample was provided from the internal voter database maintained by HighGround.

Independent and unaffiliated voters can choose which partisan primary in which they would like to participate.  The inclusion of these voters reflects their current rate of request.  The margin of error is ±4.9%.  For more information regarding the study, contact Paul Bentz at 602-528-3684.