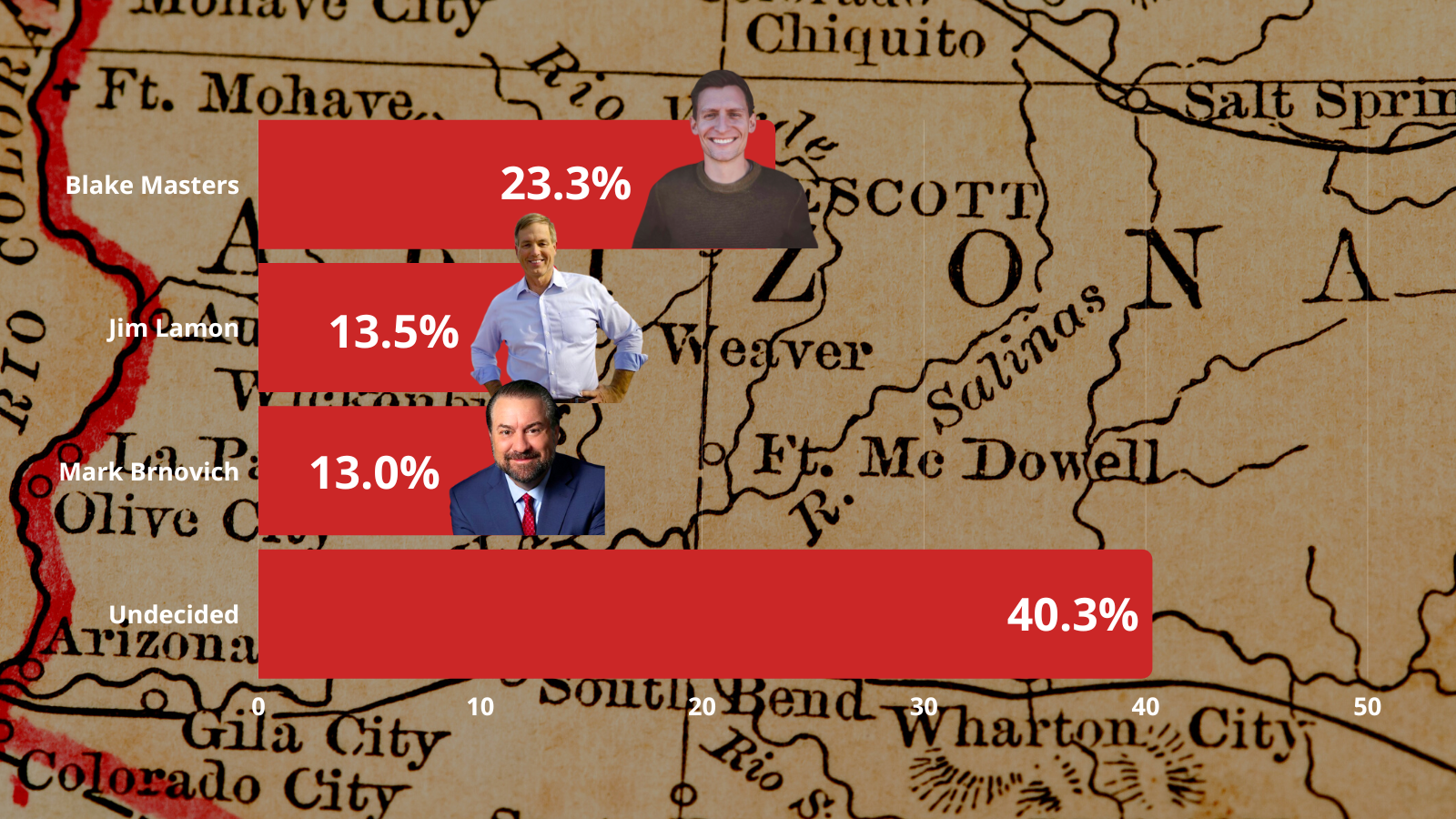 PHOENIX (July 12, 2022) – Blake Masters has emerged from the crowded Republican Primary for United States Senate to take a ten-point lead over his opponents heading into early voting.  Following the recent endorsement from Former President Donald Trump, Masters has become the front runner with 23.3% of the vote according to the latest statewide survey of likely Republican Primary voters from HighGround Public Affairs.  Businessman Jim Lamon is in second place with 13.5% in a near tie with Attorney General Mark Brnovich at 13.0%.  All other candidates were in single digits.

“A crowded field has led to a surprisingly large number of undecided voters who still have not made up their mind – even as voting has started,” said Chuck Coughlin, President and CEO of HighGround who funded the survey, “We expect that this will slow the rate of return of some Republican ballots as voters continue to study and make up their mind.  That being said, there is no doubt that Trump’s endorsement has been a significant boost to the Masters’ campaign and has helped it to catch fire at the right time.”

The N=400 survey was conducted among likely voters 7/2 through 7/7.  It was a statewide live caller survey calling both landlines and cell phones.  The margin of error is ±4.9%. The audience is set at 87.5% Republican and 12.5% independent and unaffiliated (PND/IND) to reflect ballot requests and likely participation.

These Senate results are from the same survey that revealed that Kari Lake is leading the Gubernatorial race at 39.0% compared to 35.3% for Karrin Taylor Robson in a head-to-head contest.  Like Masters, Lake is also endorsed by Trump and is riding it to front-runner status.  However, the gap between Lake and Robson has started to narrow to single digits while the margin for Masters is growing.

“With nearly four out of every ten voters undecided, the race is certainly not over.  However, these latest results demonstrate the continued effectiveness of Trump in crowded primary races where he can provide oversized influence,” explained Coughlin, “In a head-to-head, we are starting to see the former President’s support start to lose some luster, but in these crowded races, it’s still a significant advantage.  Expect the next few weeks to be spent attacking Masters to bring him back to earth.”

The N=400 survey was conducted among likely voters 7/2 through 7/7. The poll surveyed likely Arizona 2022 GOP Primary Election voters who have a history of electoral participation and was balanced to model the likely turnout of voters across party, age, region, and gender.  No weighting has been applied.  The sample was provided from the internal voter database maintained by HighGround.

Independent and unaffiliated voters can choose which partisan primary in which they would like to participate.  The inclusion of these voters reflects their current rate of request.  The margin of error is ±4.9%.  For more information regarding the study, contact Paul Bentz at 602-528-3684.