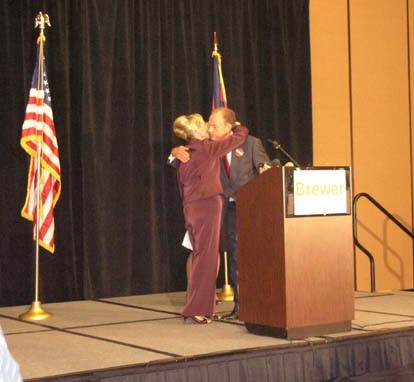 My relationship with Grant was more complicated than many others I have.  I have had the pleasure of working for John McCain, Grant Woods, Fife Symington, and Jan Brewer.  As I said – complicated.

On a personal level, I would not have remained in Arizona after John McCain’s first campaign for United States Senate in 1986, but for Grant and his dad Joe.  After I successfully screwed up the opportunity with the aforementioned campaign, Grant helped me and encouraged his dad to help me get a job at the Mesa Chamber of Commerce.  I was unemployed for many months following the campaign – but for that intervention, I probably would have returned to Ann Arbor or DC with my tail between my legs.  In looking back on that now, it was purely a selfless act on their part, they had nothing to gain and probably a quite a bit to lose.  Again, thank you Grant and Joe.

A few years later, I was Grant’s first Government Relations Director when he was elected Attorney General in 1990.  Grant had me run the first “hate crimes” bill in Arizona – in 1991.  The “world” was not for us at that time thirty years ago.  We ran fair housing and environmental enforcement legislation as well.  Oh, that was the year AZSCAM happened, and the Judiciary Chairman in the House was indicted.  As it was pointed out during his memorial services last week, Grant was a different kind of leader, even then.  As a lawyer, he wanted to right injustices.  He was a part of the successful Martin Luther King Jr. holiday campaign – the first such voter approved holiday in the country.  Go Arizona!

Grant’s greatest challenge in public life was his thirst for righteousness in a fallen world. Perhaps that is why he migrated into music and the arts as form of expression as he got older.   As a lawyer, you get verdicts.  As a politician, you get compromise.  As a lawyer, you get redemption.  As a politician, pursuing righteousness gets you criticism and division.  Politics is about slowly, incrementally moving forward (and sometimes backward).  The law is about right and wrong and the perception of victory.  But good politicians know, as Faulkner said, “The past is never dead.  It’s not even past.”

Years later when Jan Brewer became Governor, I suggested that she should ask Grant Woods to serve as a campaign co-chair with Mary Peters, the former United States Secretary of Transportation.   Governor Brewer didn’t know him that well, but she thought it was a great idea since Senator McCain was also on the ballot in 2010 and Grant was likewise very close to John.  In addition, Grant brought a more rebellious, irreverent spirit to the table.  When we launched the campaign, Grant introduced her and explained why he was part of her team (watch the video).

As Grant’s relationship with Jan matured he had every opportunity to leave her side – but he didn’t.  SB 1070 provided him that very opportunity but he stuck by her side, through it all. He was a good friend to Governor Brewer and her team, by that point in his life I think he understood more clearly the challenges that face a public figure.  We had an intense internal debate about that legislation. Grant was insistent that the Governor veto the bill.  He was convinced that most of it was unconstitutional, but more important than that, it deeply offended his sense of justice.

The trouble was that others on the team were sympathetic to the argument.  Governor Brewer was deeply contemplative, and the campaign committee engaged with Grant.  The United States Government, however, had lost operational control of the southern border.  Looking back now at the statistics, the drop houses, and the running gun battles, it was incredible how many people were arriving illegally and how widespread the epidemic of human smuggling was.  Americans were acutely aware of that as well and wanted to do something about it – the bill at the time polled at a near 70%.  It should also be noted that the business community, who would later be up in arms about the matter, never showed up to testify against the legislation.

Governor Brewer had rescued the state from near bankruptcy, raised a temporary one cent sales tax, and faced multiple Republican opponents who wanted to challenge her.  Many felt we had worked far too hard to sacrifice all that she had done to merely hand the office back over to the libertarian minded Republicans who wanted to cut government spending even further, hacking another $2 Billion from what had already been cut.  Governor Brewer and our team recognized the legitimate voter discontent over the lack of operational control at our southern border.

Grant’s lawyer’s sense of his righteousness would not let him see it that way.  However, he stuck with Jan.  He remained her loyal friend. Governor Brewer went onto a resounding victory that September and November.

Governor Brewer would go onto restore Medicaid coverage to 139,000 Arizonans, right the state’s fiscal ship, and veto another religious liberty bill which would have, again, put the State in the crosshairs of another national debate.

Today, we can see that Faulkner was right and that Hemingway, too, has been proven right.

“The world breaks everyone and afterward many are strong at the broken places.  But those that will not break it kills… It kills the very good and the very gentle and the very brave impartially. If you are none of these, you can be sure it will kill you too but there will be no special hurry.”

Grant was taken from us far too early – maybe because he was gentle and brave.  Maybe because God wanted him home with John McCain.

Senator McCain often referred to causes worth fighting for and the main character in Hemmingway’s novel “For Whom the Bell tolls,” Robert Jordan.  The title of the book was taken from a poem by John Donne and summarizes, again, how I feel about the loss of my friend.

No man is an island,
entire of itself;
every man is a piece of the continent,
a part of the main.
If a clod be washed away by the sea,
Europe is the less,
as well as if a promontory were.
as well as if a manor of thy friend’s
or of thine own were.
Any man’s death diminishes me,
because I am involved in mankind;
and therefore never send to know for whom the bell tolls;
it tolls for thee.

We should be ever mindful of the role we all play in advancing God’s kingdom while we are here.

Grant Woods advanced the Lord’s kingdom with his life.  And we are diminished in his passing.