Five Things to Think About Before Calling a 2021 Election 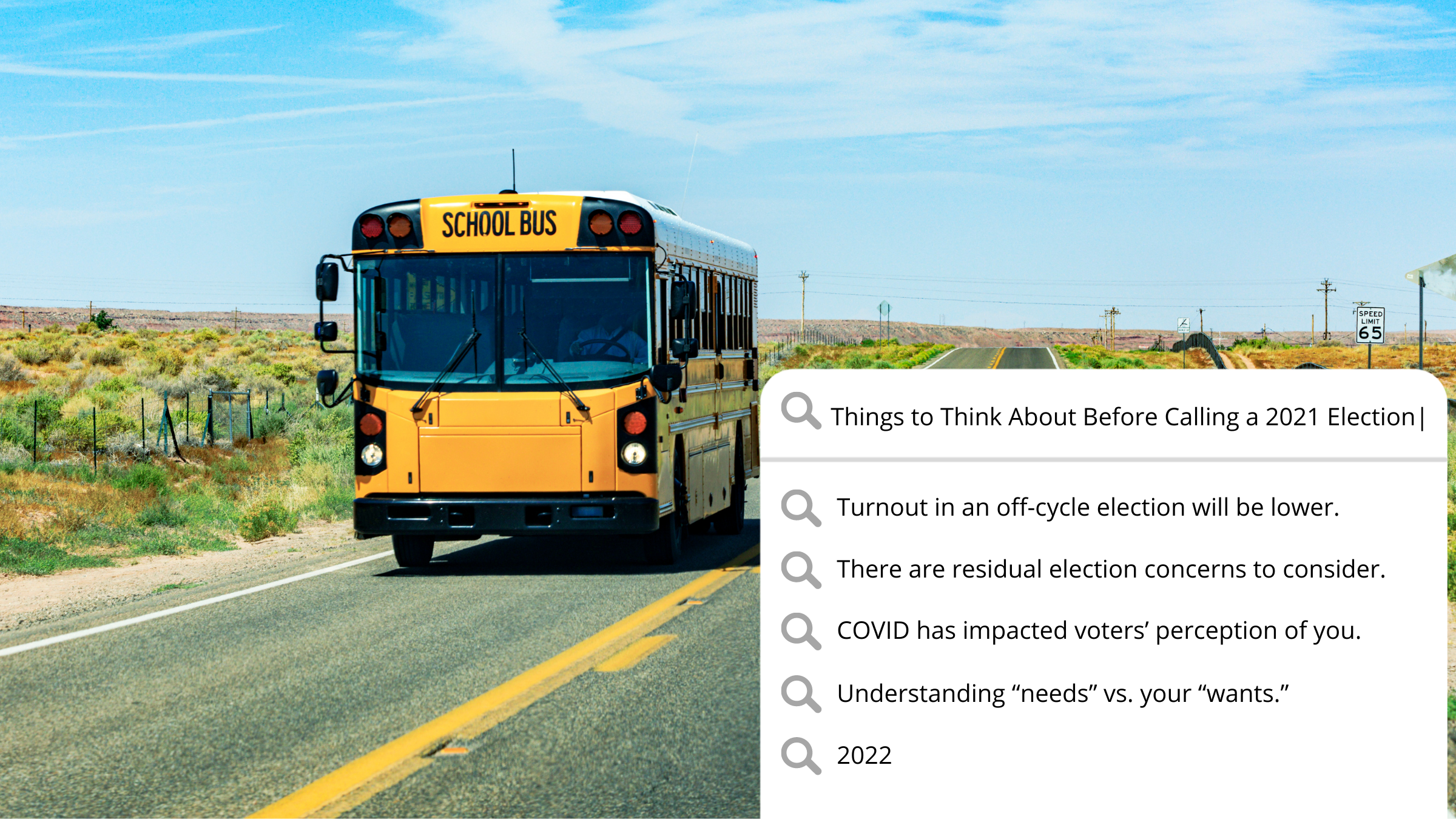 Spring is in the air and there is a growing buzz among some school districts as well as some cities and towns that 2021 might be a good year to call a special election.  In fact, some locations already have elections on the books – in Maricopa County, Phoenix has a run-off and Goodyear has charter changes on the March ballot and Cave Creek is having a general plan election in May.

While in the past I have not always been a huge fan off the off-cycle election, there are some folks who swear by them.  They say it gives you an opportunity to focus on your issue, have a less crowded ballot, enjoy less fundraising competition, and the PAC has a real chance to rally the troops.  For years, school elections were almost exclusively off-cycle affairs where the parents and teachers made up most of the electorate.  Only in the past decade or so have more and more school elections been moved to even years.

It should also be noted that some organizations have no choice but to go out in 2021 or else their override is at risk of ramping down, expiring, etc.  Certainly, a thoughtful, accurate survey is an incredibly valuable tool for those who must go out this year and those who are considering it.  However, in addition to a survey, here are five other things to think about before calling a 2021 election:

1. Turnout in an off-cycle election will be lower.

November 2020 was one of the highest electoral turnouts in Arizona state history.  Not only did the state break the three million voter mark for the first time, the 79.9% turnout almost eclipsed the record set in the 1980 election.  The General Election was teeming with more first time and younger voters – many of whom helped bring about the so-called “purple” shift that was well covered by the national media.  All of that may be great news for our state’s electoral future, but one thing is certain: turnout in 2021 will be lower.  Much lower.  The likely voting audience in an off-cycle election will skew older, more Republican, and will have a longer history of voting.  When you are thinking about a 2021 election, you must view it through the lens of a low turnout electorate.  How does a significantly older and more Republican audience view your issue?

2.   There are residual election concerns to consider.

Maricopa County just published their two separate forensic audits that demonstrated no evidence of fraud in the 2020 Election.  That is great news and their hard work to run a safe, transparent election should be commended.  Nevertheless, it will not likely stop the slew of election reform bills at the Arizona State Legislature, nor immediately reverse the irreparable damage that former President Trump wrought against early voting among some Republican cohorts.  There is demonstrable proof that Republicans changed their early voting behavior because of the doubts raised by the former president.  Only time will tell if they are willing to shift back, but it is certainly something to keep in mind – especially for those who are thinking about all-mail elections.

3.  COVID has impacted voters’ perception of you.

It should not come as a surprise that a nationwide pandemic has had an impact on how the voters think about you and your organization.  While school districts have received a lot of feedback from teachers and parents about their reopening plans, it’s less likely that they have heard much from the nearly 70% of the likely voting electorate who do not have kids at home.  On the municipal side, increased social distancing and usage of parks and open spaces may improve perception or canceled events and limited services may have diminished them.  Everyone should take some inventory about how they are perceived in this new environment.  We have all seen the active debates about how and when schools should open.  That has unquestionably shaped voters’ opinions about schools themselves. Understanding those perceptions and the impact it may have on your issues should be a priority for a successful campaign.

4.  Understand the difference between your “needs” vs. your “wants.”

Before the pandemic, Arizona was on a roll scoring in the top five in the nation in both employment and wage growth.  The state also has also fared better than most when it comes to the post-COVID economic recovery.  Typically, a booming economy is a good recipe for voters to positively consider tax issues.  However, at the same time, taxpayers may also be wary of the millions that have been spent in stimulus funds (and the more that may be coming).  School districts must also consider the passage of Prop 208 and what impact, if any, it has had on voter perceptions of school funding.  Voters in 2021 are not likely to look kindly on things they would perceive as “luxury items.”  Any funding effort should be aimed at demonstrating critical needs and why they are necessary right now because of growth, age, safety, or some other practical consideration.  If you are putting together a list of things that would be nice to have, but it is not a huge deal if the proposition fails, it’s probably best to wait until 2022.

Speaking of 2022, it is important to take some time and think about how the midterm election is going to shape up.  Redistricting is underway and the state will be adding a 10th Congressional District.  At the same time, the boundaries for the legislative districts will change.  It is likely that a cascading round of elected official musical chairs will take place after the districts are drawn and announcements are made.  Will that put your electoral issue in a better or worse spot?  Are there folks who will want to support your issue to help their standing or attack you for the same reason?  Is there a grassroots support (or opposition) force who will be otherwise occupied in 2022?  What does post-pandemic Arizona feel and look like?  What other events will capture the public attention and shape their perception of the 2022 landscape?

Between the pandemic and the General Election, 2020 was a wild ride.  Only time will tell how the 2022 will shape up, but let’s all hope the year in between is as smooth as possible.  Taking the time to ponder these five issues can certainly help along the way.