A Testament to the American Ideal

Early in my career I was honored to work for Bob Robb at his firm Nelson, Ralston, Robb.  We worked on a lot of exciting and controversial issue campaigns. One in particular that I was proud to work on was the 1990 campaign to create an MLK holiday in Arizona.

Unfortunately, State Leaders put fourth two competing ballot propositions in that cycle to create the holiday; Prop 301 and 302. 301 would have eliminated Columbus Day and 302 would have merged Lincoln’s and Washington’s birthdays into one paid holiday to make room for MLK Day.  The competing measures both failed to garner a majority of the vote with nearly 49% supporting Prop 302.

I was left to explain to national media sources that a majority of Arizonan’s had voted in favor of a King Holiday, but unfortunately not on the same one. Certainly, a valuable lesson learned in putting competing measures on the ballot. Also a valuable lesson on the strength, at that time, of the Italian American community and their defense of Columbus Day – I’m pretty certain that today, the differing cultural views of Columbus would have made for a significantly different electoral outcome.

The most memorable moment of that campaign was my effort to get a signed ballot argument, for the State’s publicity pamphlet, from former President Ronald Reagan who had signed legislation creating the holiday on November 2, 1983. Both the US House and Senate passed the legislation earlier that year with veto proof majorities creating the Federal Holiday. In signing the legislation President Regan remarked,

“Dr. King was a drum major for justice, a giant whose life was a testament to the American ideal, that one man can make a difference….

Who is it that is supposed to articulate the longings and aspirations of the people more than the preacher? Somehow the preacher must be Amos, and say, “Let justice roll down like waters and righteousness like a mighty stream… We must and we can all be drum majors for justice. That is our duty and glory as Americans… I hope that all Arizonans agree with me and join me in supporting a holiday to commemorate these ideas which Dr. King dedicated his life.”

While that campaign did not receive a majority vote, a 1992 referendum, giving voters one option for a paid King Day, was approved by Arizona voters, making Arizona voters the only State in the nation to pass the holiday with a popular public vote, #arizona-way!

Following the 1990 election I went down to the Secretary of State’s office to get the original Reagan letter, which know hangs proudly and prominently in my office at HighGround. You can see a picture of the letter below and read it’s full text here.

God Bless Dr. King and the many people who gave their lives in the defense of civil liberties and equal justice.  The fight unfortunately is never done, nor is Dr. King’s witness ever stilled.  His spirit lives on in all American’s fighting for equal justice for all.
﻿﻿ 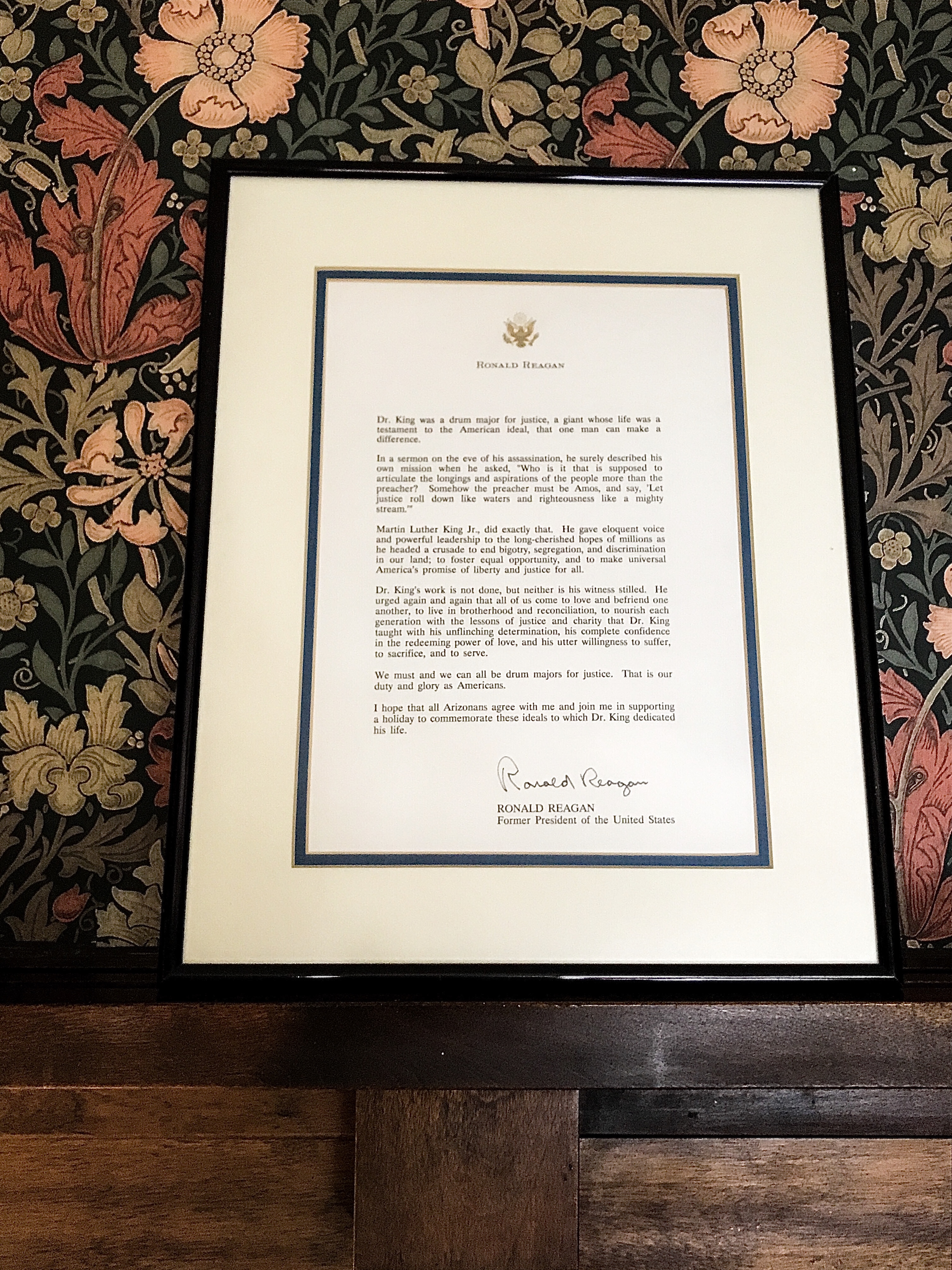