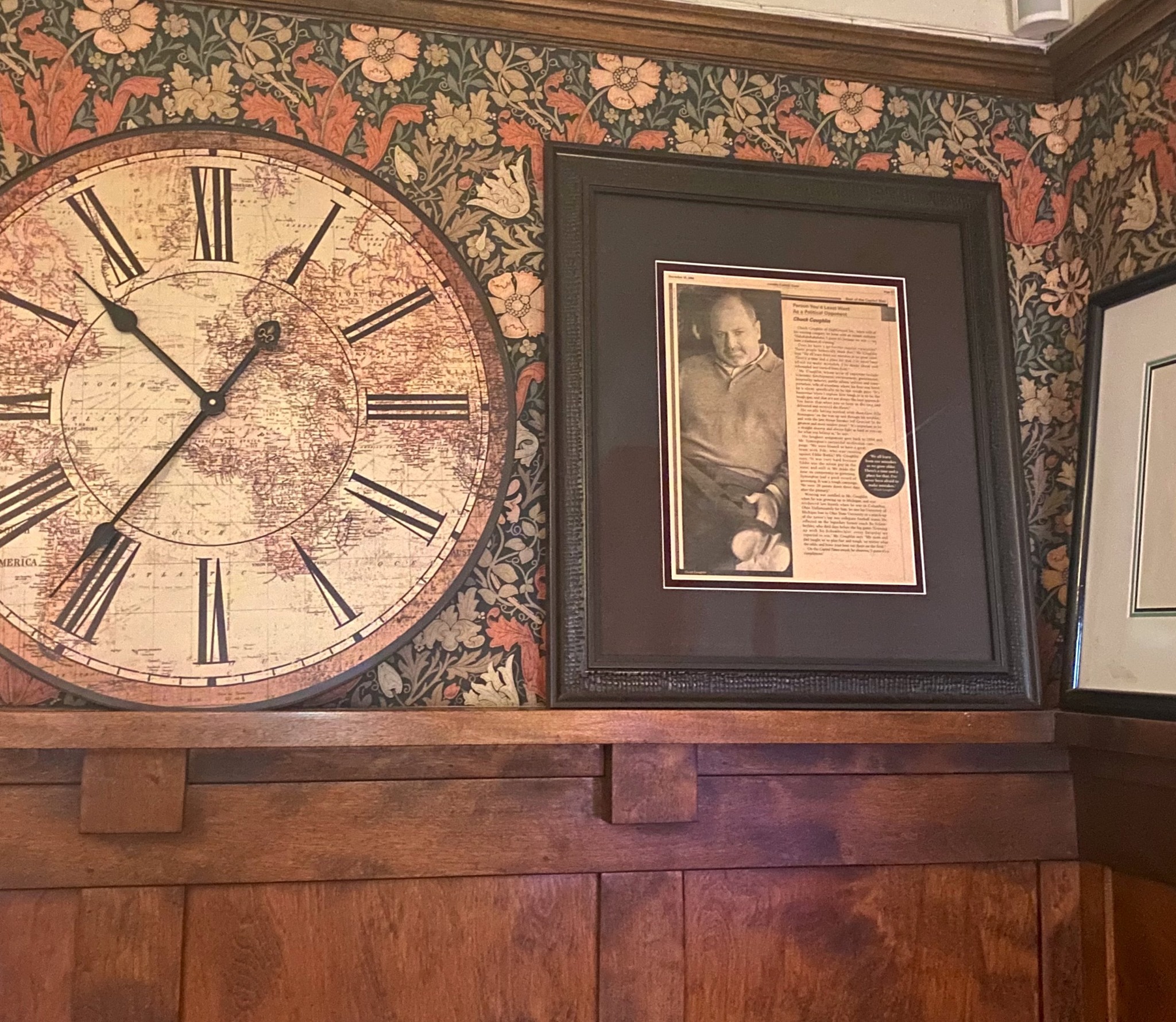 This month, HighGround is celebrating its 25th Anniversary.  I never, ever, thought that would happen.  I was 33 years old when I left Governor Symington’s office in 1996.  Of the many things I have learned since then, one of the most important is that you can never do anything worthwhile on your own.  I am certain, like the air I breathe or the warmth of the morning sun, that I would never have been able to do what I have done but for the help, wisdom, friendship, and hard knocks I have been blessed to have received along the way.

In 1984, I met John McCain on a campaign in Ohio and talked my way onto his first Senate campaign in 1986. Thank you, John, Jay Smith, and Mark Harroff for hiring me in those efforts.  All three have since passed.  I would not be here without them.

I worked for Bob Robb, the now Arizona Republic columnist, for 3 years. He helped me understand how to run a business, strive be a better writer, learn how to run campaigns, and introduced me to C.S. Lewis.  Thank you, Bob.

In 1991, I worked for Grant Woods when he served as Attorney General.  He helped me understand lobbying, how the legislature works, and what it feels like to be inside Government. Thank you, Grant.  During that time, I first met Pat Cunningham, Chief of Environmental Enforcement,  in the Attorney General’s office and we have gone on to have a lifelong relationship. He just retired from HighGround earlier this year.  Thank you, Pat, and of course, Mary Ellen and her pearls.

Running Governor Fife Symington’s re-elect in 1994 introduced me to Bill McInturff and the late Margaret Kenski, who are (and were) the best pollsters I have ever met.  Thank you, Bill.  Thank you, Margaret and Hank, you were both incredible blessings to me.

The team of people I got to work with on the Governor Symington’s re-elect are too numerous to count, Doug Cole (who still works with me today), Jay Heiler, Wes Gullett, Spencer Kamps, Jackie Norton, Maria Baier, Barry Aarons, and many more. This was the best campaign team I ever worked with – I am blessed to remain friends with many of them today.  Thanks to you all.

Fife Symington was, hands down, the best political candidate I ever had the honor of working for.  The man knew his business. It was an honor to learn from him.  Frankly, it ruined me for the rest of my career because no one would ever be a better example of how to be a candidate.  With grace, dignity, and plain hard work, he would “school” his opponents – it was more like a master class than a campaign.  Incredible. Thank you, Fife.

The kind man that he is, Bob Fannin, the then-Dean of the Capitol lobbying core, at that time, loaned me $10K to start my new business. Thank you, Bob, for your confidence and patience.

We both are not certain, but I believe I met Jan Brewer when she was in the Legislature.  However, we both distinctly remember a conversation when she was the Senate Majority Whip, and I was working for Governor Symington. She taught me how to do my job then. Neither of us would have ever thought that we would develop a lifelong bond and that HighGround would run all her campaigns including County Supervisor, Secretary of State, and Governor.  I have never met a candidate with better political instincts and who was hands down tougher than her.  Politics is a hard business; she showed great grace under incredible stress and stayed her course despite the challenges.  Tough.  She was a great blessing, in deeply troubled times and she will be remembered as a great Governor. When it comes to politics, she knows her business.  What an incredible ride we had – do not ever get into a fight with her, because she will win. Thank you, Jan.

The clients are too numerous to count or even attempt to mention.  If you are reading this, you know who you are, we would go through hell together and come back again and be better for the experience. At the end we both were grateful for having met and experienced those challenges together. Am I right, David, Doug, Sarah, Steve, Peter and Peter, Nathan, Chris, Steve, Dale, Warren, and many, many more?

We just celebrated our 25th anniversary with our accountant, Louanne Gagnon.  Incredible!  I remember my instructions to her when we started, “please keep me out of jail.”  Job accomplished – so far! But more than that, she has become a true friend, confidant, and trusted advisor.  You never know who God will bring people like Louanne into your path, just keep the door open. Thank you, Louanne.

I would be remiss not to apologize to any number of people I have screamed at and cursed over the years (Pat Flannery and any number of reporters come to mine). I remember Don Harris telling me that I had won an award from the Arizona Capitol Times for “person you would least want as an opponent,” that began some long reflections.  I have really tried to get better, and channel my father’s spirit more.  My wife says I have, but I know there is a lot of work still to do.  Thank you for all the folks that despite my bad behavior continue to return my calls!  My apologies to all.

Finally, there is absolutely no way HighGround happens without all the people I have been blessed to work with.  Doug Cole, who has been with me from nearly day one, is an invaluable friend, with almost a completely different set of skills than me. Thank you, Doug, for putting up with me and blessing me with your patience, wisdom, and loyalty.  Paul Bentz, who I met as a family friend when he was in Jr. High, is today the best pollster in Arizona.  Once again, he is a guy with a completely different set of skills that has become an invaluable asset to the company. Thank you, Paul, for your patience in dealing with my constant challenges and urgings to think about things that don’t make sense in your world. Oh, and for being the editor in chief of all the blogs.  In addition to being a man of numbers, he is a man of letters as well – a huge blessing.  Thank you, Paul, Char (his wife), Gretch and Bob (his mom and dad)!

Again, the list of HighGround alumni is far too long to dwell on. Everyone who has worked here has taught me something about being open, less dogmatic, more patient, and, quite frankly, helped me to become a better teacher.  Thank you to all the HighGround Alumni – it feels like a ever-ending update of our operating platform when anyone of you leaves, because everyone has contributed so much.

Over the years, I have learned that one of my worst characteristics is thinking other people know what I know.  It has taught me to slow down, talk, be patient, and stop presuming that I know what they know or that they know what I know.   Listen and communicate, incredible how much that helps.  I deeply miss a ton of these folks who have gone onto do great things in the world or work on other priorities – like raising a family. Thank you to the extended HighGround family!

As our larger political community has frayed, I am ever more aware that we can never do anything alone.  God created us to be in community with one another.  So, it must be that we need to cultivate a sense of gratitude towards those who have made our lives better.   But it really does go beyond that.  I will close this post expressing my own awareness and appreciation for anyone who has helped me along the road:

We build on foundations we did not lay.

This is as it should be.

Together we are more than any one person could be.

Together we can build across the generations.

Together we can renew our hope and faith in the life that is yet to unfold.

Together we can heed the call to a ministry of care and justice.

We are ever bound in community.

May it always be so.